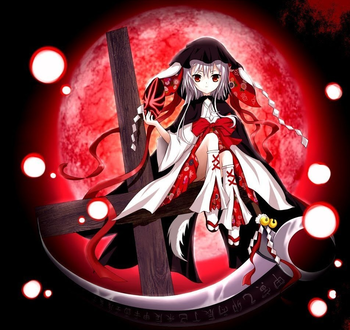 Ookami Kakushi, also translated as Wolfed Away, is the story of a sixteen year old boy, Hiroshi Kuzumi, who has recently moved into a new town in the mountains. The town is separated into new and old streets by the river, and many mysterious local customs still remain. Although confused and enjoying his new life, one person keeps her distance from him: class committee member Nemuru Kushinada. In their few encounters she gives him a word of advice: "Stay away from the old streets."
Advertisement:

The title is a play on the words o-kami ("god"), ookami ("wolf"), and kamikakushi ("spirited away"). The original Visual Novel came out on PSP in 2009, and the twelve episode anime adaptation, produced by AIC began airing in Japan on January 8, 2010 on Tokyo Broadcasting System (TBS).

Noteworthy is that the character design is by the mangaka duo Peach-Pit of Shugo Chara! and Rozen Maiden fame, amongst other works, and the original scenario is by Ryukishi07 of When They Cry fame (who was still in the middle of writing Umineko: When They Cry at the time).

Currently has a half-filled out Character Sheet. Feel free to contribute.