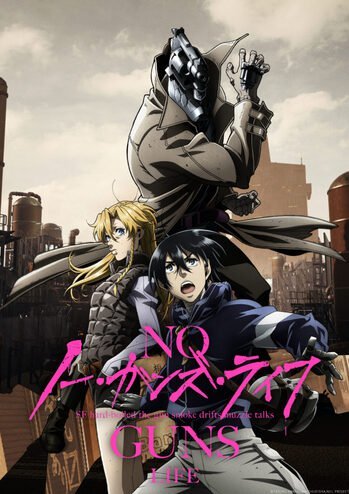 No Guns Life is a Cyberpunk manga written and illustrated by Tasuku Karasuma set some time in the future after a conflict called The Great War. It takes place in a nameless city controlled by a Mega-Corp called Beruhren. Tensions are evident between normal people and cyborgs called Extended.
Advertisement:

The story follows one such Extended named Juzo Inui, who literally has a gun for a head, among other implants. Juzo works as "Resolver" for issues involving the Extended. One day, a Renegade Extended carrying an unconscious little boy stumbles into his office on the run from the Security Bureau, begging for help. Though reluctant to get involved with such a matter, Juzo agrees, only to learn that things are far more complicated than they seem.

The manga was serialized in Ultra Jump from 2014 to 2021. An anime adaptation premiered as part of 2019's fall lineup and it's licensed by Funimation in English for North America, AnimeLab for Australia/New Zealand and Wakanim for the Scandanavian countries. Wakanim handles translation/distribution of the anime for French and Russian-speaking countries/territories.