Literature / On Her Majesty's Secret Service 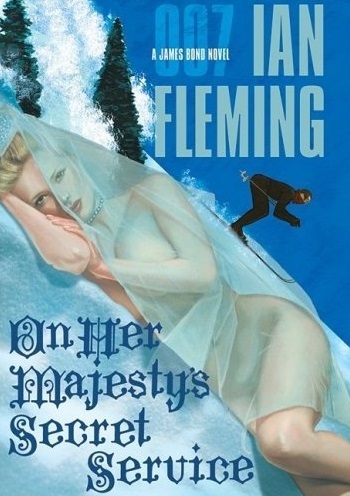 The eleventh James Bond book by Ian Fleming, published in 1963.

After the success of Operation Thunderball, SPECTRE has more or less disbanded and the hunt is on for its leader, Ernst Stavro Blofeld, but he seems to have disappeared from the face of the Earth. Bond, contemplating about resigning from the secret service, is in France investigating possible leads. There he runs into depressed Teresa di Vincenzo, and he stops her from committing suicide. This leads to him being introduced to the crimeboss Marc-Ange Draco, her father, who asks him to help her. Bond agrees, but only he receives help for his task of locating Blofeld. This leads to a dangerous game high in the Swiss alps, where a big plan to attck England is being concocted.

The novel was adapted into the sixth James Bond film.