Literature / The Spy Who Loved Me 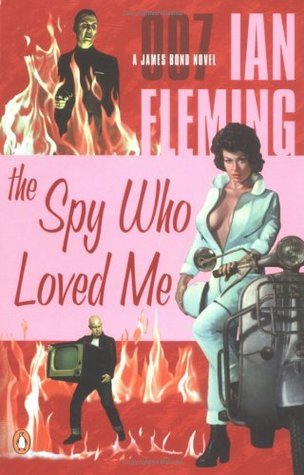 The tenth James Bond book by Ian Fleming, published in 1962. He personally felt this was his worst work.

While travelling through America to "escape" her past life, one Vivienne Michel takes a job of being receptionist for a motel named The Dreamy Pines, which soon becomes a stage for crime and romance. The book consists of three parts; "Me" gives Vivienne's backstory to the reader, "Them" is about her work in the motel and the arrival of the main antagonists, and in "Him", James Bond himself becomes a player in the story.

The tenth James Bond film shares the name of the novel but not its plot, as Fleming refused to allow them to use anything else. However, its main villains Sluggsy Morant and Sol "Horror" Horowitz (the first one completely bald, and the second with metal teeth) did sneak into the film in the guise of Sandor and Jaws, because Fleming had been dead over a decade at this point and couldn't really object.

Not to be confused with James Bond, The Spy Who Loved Me, the novelization of the aforementioned film, written by Christopher Wood.