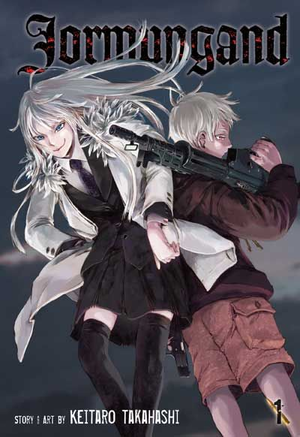 "Weaponize World Peace."
"I have devoured five continents. I have slurped three oceans dry. The vast sky alone remains alone out of my long reach, for I am trapped in this body which lacks wings, hands and feet. I am the world serpent. I am Jormungand."
— Exposition for the franchise.
Advertisement:

Jormungand is an action manga written and illustrated by Keitaro Takahashi that started its run in 2006. Originally published by Shogakukan, it has been licensed by Viz Media for release in English under their "Viz Signature" brand. An anime adaptation aired beginning April 10, 2012, with a second season that started October 10, 2012 subtitled PERFECT ORDER. Funimation handled a North American license while Dybex has the anime license for the French-speaking market. A Drama CD had been released based on the Orchestra Arc with only Unsho Ishizuka reprising his role as everyone else involved in the Drama CD were replaced. For the manga, VIZ Media has the manga published in North America with Taiwan Tohan publishing it for Taiwan. Shogakukan is the official publisher of Jormungand in Japan. Finally, Meian started publishing the manga in France in August 2019.

H&C Logistics Incorporated is a humble shipping business... and one of its divisions is the Europe/Africa Weapons Transport Division, a team of nine mercenaries led by one of the company president's children, Koko Hekmatyar, a brilliant weapons dealer. Consisting of hardened soldiers from a wide array of military fields and martial backgrounds, the group is ruthless, efficient, and well known for their ability to quickly remove anything or anyone that gets in their way. Koko's team operates under the goal of "promoting world peace" by ensuring that each side is armed to the teeth... for the right price, of course.

The veterans of the group are alarmed one day when Koko introduces her newest recruit, an enigmatic young boy named Jonah. Jonah is a former child soldier who is not afraid to profess his hatred for anyone who creates, sells, or uses weapons of war, but who nevertheless possesses combat skills on par with even the most accomplished members of the group. Not wasting any time, Koko announces that Jonah will soon get a chance to prove himself in his first "performance review." It seems that a local government has confiscated a shipment of weapons that would upset the balance of power in the entire region. However, the shipment belongs to HCLI... and Koko Hekmatyar is not a woman who takes others interfering in her business lightly.

As the story progresses, Koko travels the world, accompanied by her bodyguards, on seemingly unconnected jobs, while quietly working towards the completion of her own private plan: "Jormungand."