Anime / Joran: The Princess of Snow and Blood 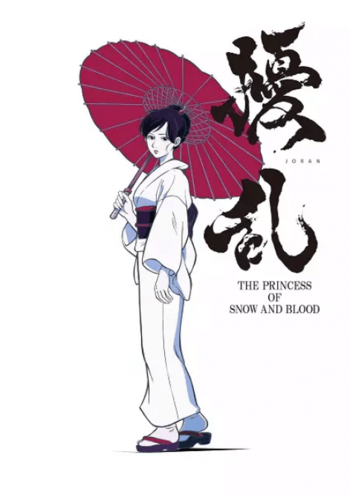 The year is 1931, the 64th year of the Meiji era. In a world where Tokugawa Yoshinobu did not hand power over to the prime minister, Japan's technology is developing rapidly, especially in light of the recent discovery of a unique energy source known as the "Dragon Vein." Despite this unexpected prosperity, the government is threatened by an insurgent group known as "Kuchinawa," which hates the isolationist policies of Tokugawa and aims to overthrow the Shogunate. In response, the Tokugawa government has created "Nue," a secret police organization dedicated to rooting out Kuchinawa.

Seemingly unrelated to all of this, a quiet bookstore is run by a young woman named Sawa Yukimura. Beautiful yet aloof, Sawa is actually the lone survivor of the Karasumori clan, who were wiped out by a man seeking the secret of their mysterious abilities. Sawa is now an executioner for Nue, taking out targets and changelings all the while working to find the man who killed her family in order to take her revenge.

Loosely inspired by Lady Snowblood, Joran: The Princess of Snow and Blood is an original Anime series animated by Bakken Record and produced by Bushiroad and Tatsunoko Production that aired in the Spring 2021 season. It is directed by Susumu Kudō and written by Rika Nezu and Kunihiko Okada. Crunchyroll streams the series outside of Japan.