Manga / Is the Order a Rabbit? 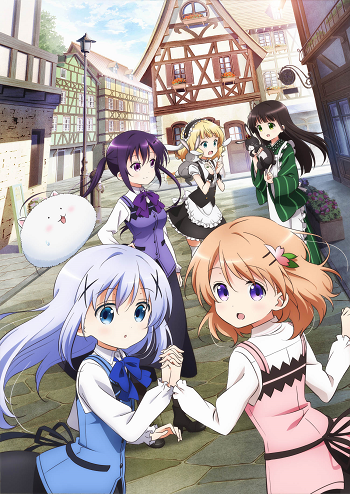 What will your order be today?
Advertisement:

Is the Order a Rabbit? (Gochuumon wa Usagi Desu ka?, abbreviated as GochiUsa), is a 4Koma manga by Koi that has been serialised in Manga Time Kirara Max since March 2011. White Fox produced an anime adaptation that aired during Spring 2014 Anime, and a second season, produced by White Fox and Kinema Citrus, aired during the Fall 2015 Anime season. In addition, Crunchyroll is streaming the anime, so the anime can be watched here

The story is centred around Cocoa Hoto, a high school girl who moves to a new town to attend high school. While wandering around town looking for the café she's supposed to be working at to pay for her accommodations, she stumbles across a café called Rabbit House. Under the impression that it's a place where patrons can cuddle with rabbits, she happily enters and meets Chino Kafū, an on-duty waitress who arrives to take her order. Despite being surprised by the absence of rabbits, Chino reluctantly informs Cocoa that she can cuddle the rabbit sitting on her head once for each cup of coffee she orders.

It turns out that Rabbit House happens to be the same café that Cocoa was looking for: she learns that Rabbit House is where she'll be working during the period of her studies. Meeting the disciplined Rize Tedeza, refined but air-headed Chiya Ujimatsu and dignified Syaro Kirima, Cocoa settles into life as a waitress at Rabbit House, balancing her time between serving the café's patrons, helping out with the chores around the Kafū residence, studying for exams and spending time with her new friends. With her ever-cheerful and energetic personality, Cocoa brightens up the world around her, finding joy in everyday activities as the seasons pass. Despite finding herself annoyed at Cocoa's day-to-day antics, Chino gradually comes to care deeply for her in spite of the former's insistence on being addressed as "big sister".

Is the Order a Rabbit? provides examples of: