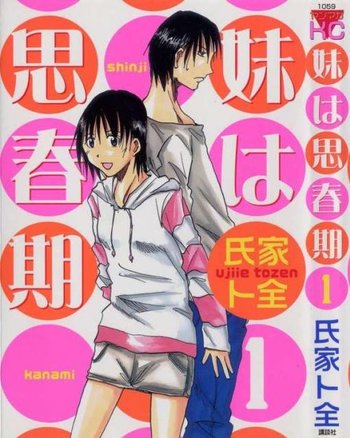 Imouto wa Shishunki ("Younger Sister in Puberty") is a 4koma manga by Ujiie Tozen, which was serialized in Weekly Young Magazine from 2001 to 2007.
Advertisement:

It is about 18-year old Ordinary High-School Student Shinji Jyoushima and his very perverted 16-year old sister, Kanami. Like many 4komas, it is a Slice of Life comedy, dealing with the daily life of the siblings. Its humor is mostly of the sexual kind, mostly delivered by Kanami, who often has nothing else on her mind than sex (although she isn't the only one who seems like that).