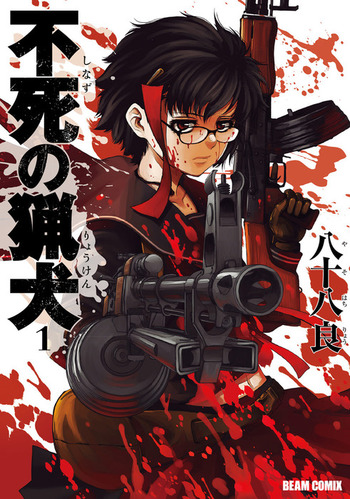 Featured in this series: girls, gore and guns. Especially guns.
"Fever, cough, runny nose… Having a cold is just the worst! Why endure it, when you can take Drop Dead Ace! Just take two at bed time, you'll pass away when you pass out! When morning comes, you're refreshed and ready for a full day!"
"Drop Dead Ace, the little yellow pill… ♪"
—Ad for suicide pills, one of the tamer types of medicine for immortals.

On another Earth, death almost never visits humanity. By an unknown mechanism that defies the known laws of physics, every human is blessed with Revival, the ability to come back to life after fatal injuries, and can only die after their natural lifespan has run its course. Committing temporary suicide to relieve minor illnesses and pains is commonplace, and thus any medical care is nonexistent. The world is a much less grim place... until one day, when people start failing to revive after death.

A mysterious disease is spreading rapidly around the world: Resurrection Deficiency Syndrome (RDS), which removes the infected's ability to resurrect, rendering their next death permanent. The disease is spread only by human carriers, known as Vectors, who willfully or unknowingly transmit the condition to immortals. In an effort to preserve the human race's immortality, police agencies and militaries cooperate with the UN Disease Control Office, aka UNDO, to track down and exterminate Vectors before they can spread RDS — only for strange, nearly superhuman individuals dubbed Escape Artists to intervene on behalf of the infected, spiriting them away from the police for unknown reasons. After police lieutenant Shin'ichi Kenzaki loses his sister in one of these incidents, he heads up a new task force dedicated to both killing Vectors and putting an end to the Escape Artists. And the Escape Artists take an interest in him in turn, including the bespectacled girl who helped his sister's killer get away...

Immortal Hounds is an ongoing Seinen manga by Ryo Yasohachi, beginning in 2013. It blends copious action and grotesque violence with investigations, guesswork, gambits, and constant twists, centered around a colorful cast of characters whose morality is never quite clear.

After volume 6, the story continued as a sequel titled Immortal Ridge, this time from the point of view of the vectors. The numbering was rebooted accordingly.

Due to the rapid pace of the plot and reveals, all spoilers up to Volume 6 will be unmarked.