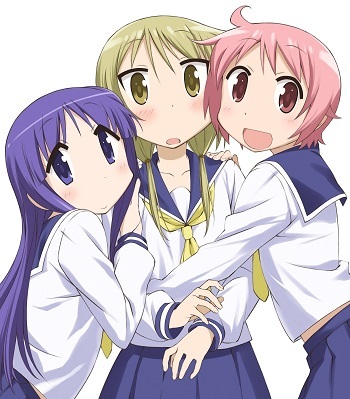 The Data Processing Club, from left to right: Yukari, Yui and Yuzuko
Advertisement:

Yuyushiki ("The YuYu Style") is a four-panel manga by Komata Mikami, which began serialization in Manga Time Kirara in 2008. Kinema Citrus adapted it into an anime, which aired during the Spring 2013 Anime season. It was simulcast on Crunchyroll

and can be watched on The Anime Network

Upon starting life at an all-girls high school, Yui, Yuzuko, and Yukari revitalise the formerly derelict data processing club. Spending most of their days looking up obscure or unusual things, their ordinary lives are often accompanied by unusual puns and various antics. The unusual friendship between Yui, Yuzuko and Yukari allow for the three to find peculiar humour in the most mundane of observations in their everyday lives.