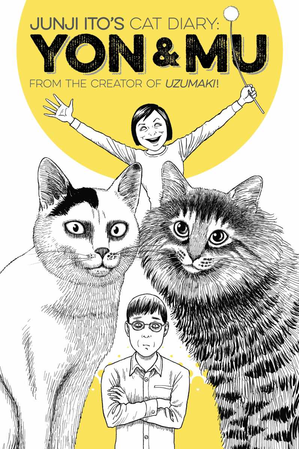 Junji Ito's Cat Diary: Yon & Mu (Itō Junji no Neko Nikki: Yon & Mū) is a manga by famous horror manga author Junji Ito. The manga was serialized in Monthly Magazine Z from 2008 to 2009, with its chapters compiled into a single volume.

In stark contrast to his typical works, the series isn't horror, instead being an autobiographical slice-of-life piece detailing Ito's domestic life with his fiancée upon moving house and getting the titular cats.

Not contrary to his usual works, however, is the art, which uses all of Ito's horrific trademarks... but for ridiculous effect, given the inappropriately harmless images they are applied to.

It's that kind of manga.