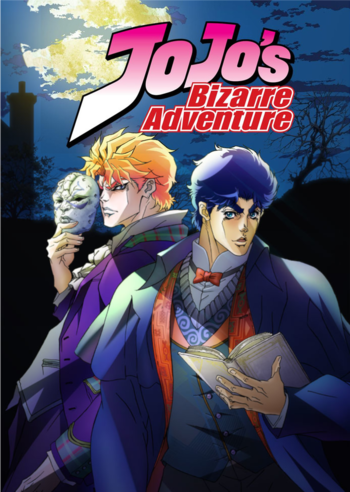 I'm fighting to protect my family from those that wish it harm.
"There are times when a gentleman has to be courageous and fight, even when his opponent is bigger than he is and he knows he’s going to lose!"
— Jonathan Joestar
Advertisement:

Phantom Blood (ファントムブラッド) is the first part of the manga saga JoJo's Bizarre Adventure, originally serialized in Shonen Jump throughout most of 1987. It is followed by Battle Tendency.

In the late 1880s, rich kid Jonathan Joestar (a.k.a. JoJo) is introduced to a newly orphaned youth named Dio Brando. Jonathan's wealthy father George takes the boy in and raises him as his own to return the favor for Dio's late father, who accidentally saved George and Jonathan after a buggy crash that killed George's wife and Jonathan's mother, Mary. However, Dio is secretly scheming to take Jonathan's place as the favored son and heir to the Joestar family fortune. He torments Jonathan throughout their childhood in an attempt to break him, from kneeing Jonathan's dog in the jaw for no reason to stealing his girlfriend's first kiss. When Jonathan's resolve seems insurmountable, however, Dio takes a new approach: building up a bond between them over many years while poisoning George. Things become complicated when Jonathan learns of these plans and confronts Dio, only for Dio to become a vampire using an ancient stone mask that Jonathan had been researching. After a fiery battle, Jonathan is informed by a man named William A. Zeppeli that Dio is still alive and plans to take over the world. He sets out on an adventure to train in the ways of Hamon and destroy his undying foe for good.

Phantom Blood was adapted into a beat-'em-up PlayStation 2 game and a film, both titled JoJo's Bizarre Adventure: Phantom Blood, in 2006 and 2007 respectively as part of the franchise's 20th anniversary. The film is notable for now being impossible to view, having never been given a home release; only some promotional material and the first 16 minutes of a workprint can be found online. This arc was also adapted into the first 9 episodes of the 2012 anime. The English dub of the anime premiered in 2016 on Toonami.

How many tropes have you added in your life?

open/close all folders
Tropes # to E
Tropes F to I
Tropes J to Z
You thought this would be a witty stinger, BUT IT WAS I, DIO!! That said, how many loaves of bread have you eaten in your lifetime?
Feedback