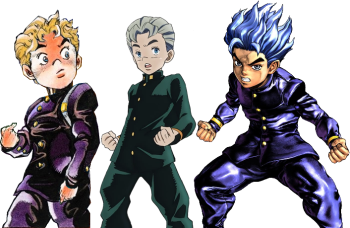 Consistency? Koichi's never heard of it.note (left to right: his colors in the manga, anime, and games)
Advertisement:

JoJo's Bizarre Adventure has always been very liberal with its color schemes. Characters can have radically different palettes between the anime, manga, games, and illustrations. According to Word of God, no colors are set in stone aside from Dio and Giorno's hair (and even that doesn't always stick).

Note that for the games, characters will usually have their other color schemes available as a Palette Swap option or alternate outfit. These entries are based on their default colors in these games. This page also only covers the manga, anime, and games—even more variants appear in other artwork and merchandise.