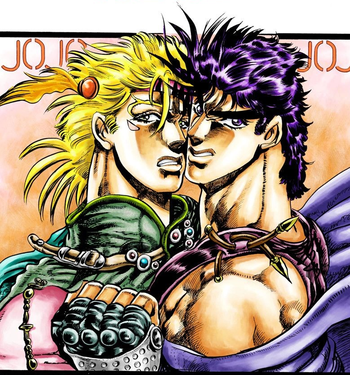 Caesar and Joseph. They'd die for each other.spoilers In Caesar's case, literally.
Advertisement:

Araki-sensei learned how to draw the male form by studying Ancient Greek art, and took much of the visual inspiration for this series from Italian fashion magazines. Maybe that's why JoJo's Bizarre Adventure has way more Ho Yay than is normal for a shōnen series. Some of the more egregious examples (such as when Joseph and Avdol were magnetized, and when Narancia heard Mista saying "Giorno, not so hard") are often played for comedy's sake, and the Ho Yay is sometimes lampshaded by the characters in the situation.

open/close all folders
General
Advertisement:
Phantom Blood
Battle Tendency
Battle Tendency is positively overflowing with it, what with it being about a bunch of musclebound men who do combat while covered in oil and wearing next to nothing:
Stardust Crusaders
Diamond is Unbreakable
Golden Wind
Advertisement:
Stone Ocean
Steel Ball Run
JoJolion