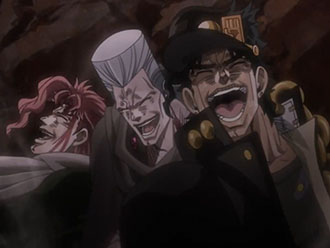 You know it's funny when even Jotaro is laughing!
Indian restaurant worker: Sir, is there something wrong?
Polnareff: DON'T "IS SOMETHING WRONG" ME! Th-th-th-the... toilet! The... toilet! THERE'S A PIG STICKING ITS HEAD OUT OF IT!
— The series' bizarre nature in a nutshell.
Advertisement:

While most of the time, JoJo's Bizarre Adventure is a serious battle manga/anime, most of the cast is completely insane. Half the fun is watching them pull out incredibly zany schemes, hurt each other in increasingly ridiculous ways, or play off each other, with their own brands of Insane Troll Logic. There's a reason it became a meme factory.