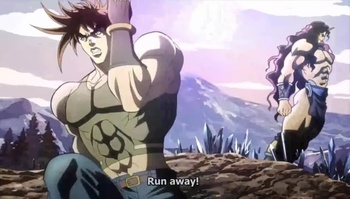 Ladies and gentlemen, The Joestar family's Secret Technique.
Its beginnings were mainly serious and filled with horror. Now, Battle Tendency cranks up the "bizarre" part of the series' title. And how!
Advertisement: