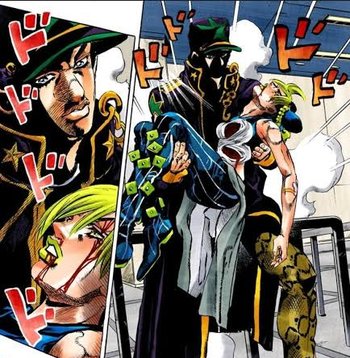 "I want you to know... You've always been incredibly important to me..."
"I have no regrets. I am glad I was able to witness your growth as a warrior. Perhaps the reason I lived these thousands of years was so that I could meet you at the end. Farewell to you, warrior JoJo..."
— Wamuu's last words.
Advertisement:

Tearjerkers aren't the only way for JoJo's Bizarre Adventure to make you shed tears. The series is filled with many moments of love and pure friendship, where the best of humanity is displayed in all its Narm Charm.