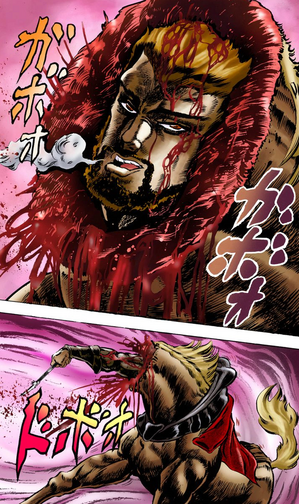 "What in the blue hell?! That crazy blighter's inside a horse! Good God! This one's mad as a hatter! Dio's evil, yeah, but I ain't seen him jump out of any animal so far!"
— Robert E. O. Speedwagon towards Jack the Ripper's emergence from a horse.
Advertisement:

JoJo's Bizarre Adventure is known for its awesomeness in its epic moments, its tragic history and quirky events, as well as its few moments of genuine happiness.

However, it didn't start off as this; it initially focused on a man turned into a vampire and his Legions of Hell, and the Gorn could get extreme at times. It only gets worse with all the Body Horror of the Pillar Men and Stands in later parts.

EVEN SPEEDWAGON IS AFRAID!