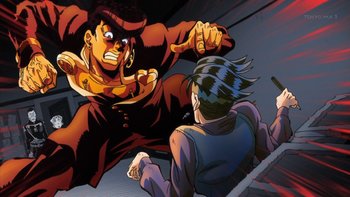 Rohan, regretting everything.
Josuke: I swear, it's like we're in The Twilight Zone.
Okuyasu: I don't know what that means, but my brain hurts just watching all this weirdness.
— The two after witnessing Tamami Kobayashi's unusual change in character

Part 4 of JoJo's Bizarre Adventure, Diamond Is Unbreakable takes on a lighter tone compared to previous parts; because of this, the bizarreness tends to manifest more in silly than shocking aspects. As a result, there are more than your usual share of Funny Moments here: aided by a more-eclectic cast of characters than usual.

Hunt For The Arrow