As this is a Heartwarming Moments page, all spoilers are left unmarked. 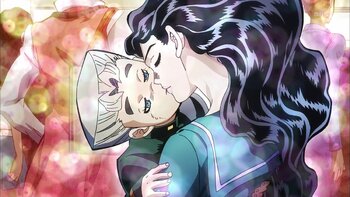 The only thing that's more unbreakable than diamonds is the love shared between Koichi and Yukako.
"It can be said that humans live by destroying. In the midst of that, your power is kinder than anything else."
— Jotaro Kujo to Josuke about the wonderful power of Crazy Diamond.
Advertisement: