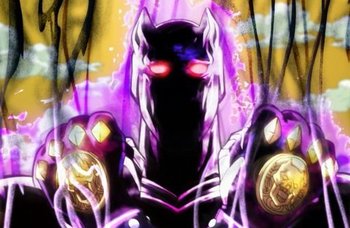 Kira will sleep soundly tonight... but you won't.
"Sorry, but Killer Queen has already left its mark on the doorknob."
— Yoshikage Kira warning an unfortunate student of his untimely death.
Advertisement:

You'd think that since this part is Lighter and Softer, JoJo's Bizarre Adventure would let up on the horror this time around. You would be horribly wrong, as Diamond is Unbreakable comes to show.