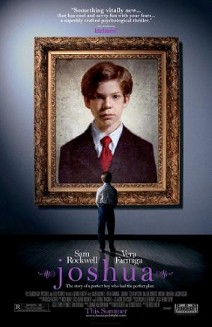 Joshua is a 2007 American psychological horror/thriller film about an affluent young Manhattan family and how they are torn apart by the increasingly sadistic behavior of their disturbed son, Joshua. The film was directed by George Ratliff and stars Sam Rockwell, Vera Farmiga, Dallas Roberts, Michael McKean, Celia Weston, and Jacob Kogan as Joshua. It was released on July 6, 2007 in the United States.