Film / Journey to the Seventh Planet 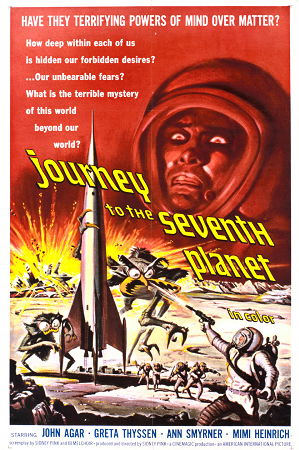 Journey to the Seventh Planet is a 1962 Danish-American B science-fiction/horror film directed by Sidney W. Pink.

In the year 2001, the United Nations has assumed total control of Earth; there are no longer any wars and mankind is solely concerned with science. To that end, most of the solar system has been explored. Five astronauts; Captain Don Graham, Eric, Karl, Barry O'Sullivan and Svend (John Agar, Carl Ottosen, Peter Monch, Ove Sprogøe and Louis Miehe-Renard) embark on a mission to the one planet that hasn't; Uranus, the Seventh Planet.

Once there, they detect radiation, and upon going into free-fall around the planet a mysterious alien force freezes them in time and scans their minds. When they regain consciousness their instruments say that only 2 hours have passed, but they verify via a rotten apple that far more time has passed. Upon landing, they discover an earth-like forest, which one of the astronauts recognizes as being one he remembers from his childhood, and which they then discover is just an illusion. Effigies of women from their past then also appear. The astronauts then find a force-field surrounding the forest, and eventually decide to venture beyond it into the natural Uranusian environment. There, they discover a cave containing a giant alien brain; and it is revealed that the brain read their minds and conjured the forest and the women to weaken their minds so it could possess them and go to Earth via them and take it over. The astronauts must now defeat the entity; but the effigies of the women under its control aren't about to let that happen...

The film features a comparative lack of Narm and Nightmare Retardant compared to usual 50s/60s B sci-fi/horror fare; the plot is interesting and the atmosphere is genuinely spooky. The film is also notable for its similar plot to that of Solaris, which it precedes by a full decade; however the book Solaris is based on came before it by a year.

Not to be confused with 2020's Journey to the Savage Planet.