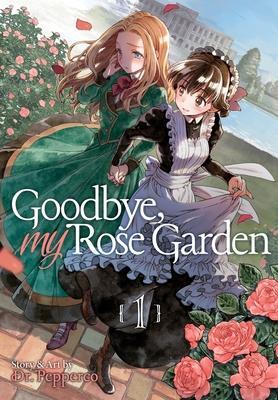 Early in the twentieth century, a young Japanese teacher named Hanako journeys to England in pursuit of two dreams: to meet Victor Franks — a reclusive writer and her personal idol — and to become a novelist in her own right. It soon becomes apparent that neither of these aspirations look like they have any chance of coming true, but fortune smiles upon her in the form of the noblewoman Alice Douglas. Alice offers Hanako employment as her personal maid, and the two soon form a surprisingly friendly relationship. When Hanako tells Alice that she would give anything to obtain her wish to meet Franks, Alice reveals that she can introduce her to him — but only under one condition.

As Hanako tries to understand why Alice would make such a request of her, she learns more about her past... and little by little, the two women grow closer.

Goodbye, My Rose Garden (Sayonara Rose Garden) is a Period Piece yuri romance manga by Dr. Pepperco. The series began in 2018 as serialized in MAGxiv for Mag Garden, and the third and final volume was published in February 2020.

Tropes appearing in Goodbye My Rose Garden include: