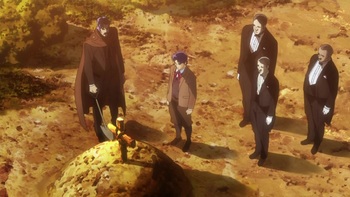 The first of many to come, and we don't just mean human casualties.
"To love and win is the best thing. To love and lose, the next best."
— William Makepeace Thackeray (Quoted by narrator)
Advertisement:

Phantom Blood was the one that started the journey of the Joestars, filled with laughs, frights, love and thrills... and so many tears.