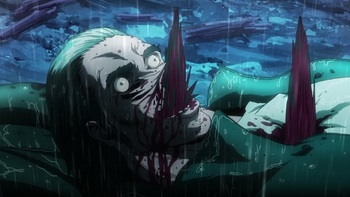 Some way to start the series, huh...?
"Dio, you villain! What sort of monster have you become?!"
— Jonathan Joestar, speaking for all of us.
Advertisement:

A long time ago, before the self-awareness that defined an entire generation, Phantom Blood had plenty of bloody terrors to be found in Victorian London.