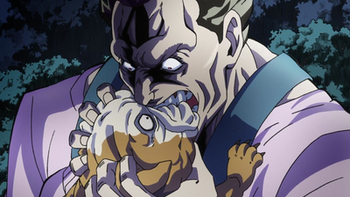 "This fellow reeks of brimstone and blood worse than anyone I've ever laid eyes on! HE IS PURE EVIL, right down to his very bones! Is he a victim of circumstance, you're wondering? Not on your life! He's been evil since he drew his first breath!"
—Robert E. O. Speedwagon on Dio Brando, Phantom Blood

During its extraordinarily long run, JoJo's Bizarre Adventure has showcased a great variety of antagonists. Many are merely jerks; some are comical in their ineptitude; others still are sympathetic characters with understandable motives and tragic pasts. Then there's another breed of villain: those who commit horrific actions with no justification. Here are the latter.