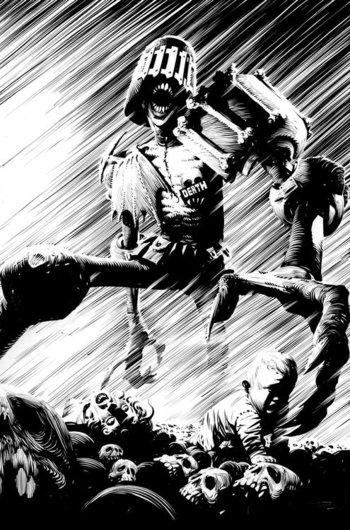 "The crime iss life.
The ssentence iss...DEATH!"
"ALL OF YOU, MY CHILDREN! EVERY LAST CORPSE ON PLANET EARTH! UP AND AT 'EM! SMASH DOWN THE WALLS OF THE MEGA-CITIES! FEAST ON THE LIVING FLESH WITHIN! LET NONE ESCAPE! KILL THE WORLD!"
—Sabbat the Necromagus, Judgment Day part 5 (2000 AD prog 789)
Advertisement:

Judge Dredd takes place After the End, but in a dystopia such as Mega-City One, which is a Vice City, Police State, and Crapsack World, Joseph "Joe" Dredd himself is an angel compared to several of his adversaries.

Groups, and works within groups, are roughly arranged by publication date/release date.

Lawman of the Future