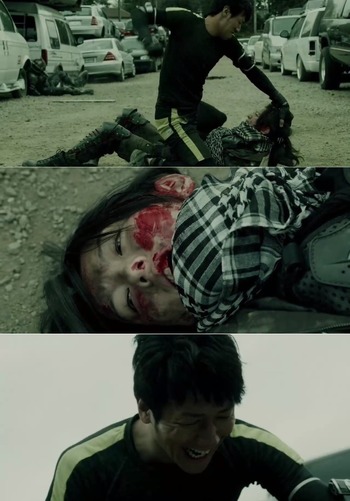 "For some time now...Beating a living thing until it's bloody, broken, unable to move...has made me feel so alive. It's an incredible feeling. Let's see how this feels!"
"He is a monster, far worse than the Roidmudes you despise. The marathon of torture that man inflicted upon me...It has been burned into my memory..."
—Heart, on Professor Tenjuro Banno, to Banno's son Go(u) Shijima, Kamen Rider Drive, "Why Are the Two Scientists in a Conflict?"
Advertisement:
Kamen Rider has been around since 1971, with its main theme being about how someone can rise above tragedy to become a hero and while many villains have redeeming qualities, these are the very worst that have none. While some are genuine monsters, all too often they're all too human.