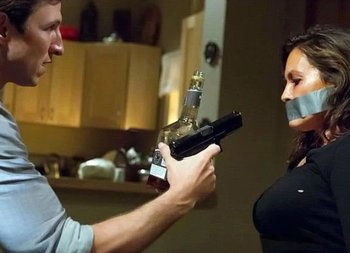 "Are you feeling sad? Thinking about someone you're never gonna see again?...You're gonna cry his name out at some point. They always do."
"A 60-year-old woman. She did things she never expected to do...Do you wanna hear how, in the evening, she said she would do anything as she begged for her life? Or how, in the morning, she begged me to take her out of her misery? Which do you think I enjoyed more?"
—William Lewis, Law & Order: Special Victims Unit, "Her Negotiation"; after telling Detectives Benson and Amaro in graphic detail what he did to one of his victims (including putting out cigarettes on her)
Advertisement:

In the criminal justice system, these particular offenders are considered especially heinous. In cities around the country, the officials who investigate these vicious felonies must unravel their tangled webs of murder, rape, and violence to bring down these vile criminals. These are their stories.