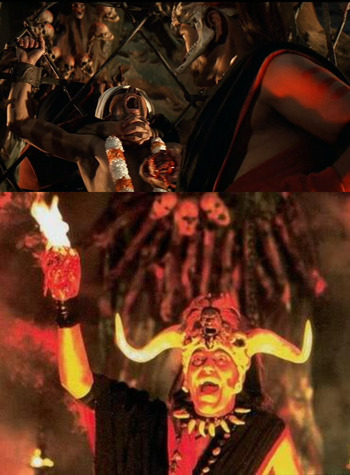 "The British in India will be slaughtered. Then we will overrun the Muslims. Then the Hebrew God will fall, and then the Christian God will be cast down and forgotten. Soon, Kali Ma will rule the world."
"We will crush the intruders out and wash the earth with their blood. Their deaths will cleanse us. Their screams from the stake will lull us to sleep. For it is such a purity death has, such a perfect beauty."
—Mattias Targo, The Young Indiana Jones Chronicles, "Masks of Evil"
Advertisement:

Indiana Jones may hate snakes, but the Adventurer Archaeologist has faced far worse.