Monster / A Nightmare on Elm Street 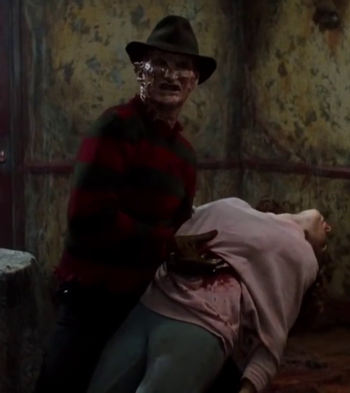 "His name is Freddy Krueger. He was a child murderer before he died, and after he died...well, he became something worse."
"My children. From the very beginning, it was the children who gave me my power. The Springwood Slasher, that's what they called me. My reign of terror was legendary. Dozens of children would fall by my blades. Then the parents of Springwood came for me. Taking justice into their own hands. When I was alive, I might have been a little naughty, but after they killed me, I became something much, much worse. The stuff nightmares are made of. The children still feared me and their fear gave me the power to invade their dreams. And that's when the fun REALLY began. Until they figured out a way to forget about me. To erase me completely. Being dead wasn't a problem, but being forgotten, now that's a BITCH. I can't come back if nobody remembers me. I can't come back if nobody's afraid. I had to search the bowels of Hell, but I found someone, someone who'll make 'em remember. He may get the blood, but I'll get the glory, and that fear is my ticket home."
— Freddy Krueger, Freddy vs. Jason
Advertisement:

Freddy Krueger has been terrorizing the children of Springwood since 1984. Here are some of his worst deeds, along with other characters who match him in vileness.