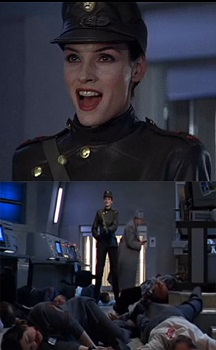 Xenia Onatopp gets off on anything that moves...by shooting until it doesn't.
Elliot Carver: What you are about to witness, Ms. Lin, is not so much a missile attack, but the launch of a new world order. In precisely five minutes after your countrymen have attacked the British fleet, I shall retaliate for dear old England by sending this missile into Beijing, where General Chang has just called an emergency meeting of the Chinese High Command. Unfortunately, General Chang will be delayed in traffic, arriving just after the missile has killed your leaders, and too late to stop the air force from sinking the entire British fleet, but he will be just in time to take over the Government, negotiate a truce, and emerge as a world leader, with the Nobel Peace Prize.
Advertisement:
Wai Lin: And what do you get?
Elliot Carver: Me? Oh, nothing. Just exclusive broadcasting rights in China for the next hundred years.
—Tomorrow Never Dies

The James Bond franchise features a lot of masterminds and businessmen who have various nefarious intentions. Several of the secret agent's foes go above and beyond to establish their pure malevolence.

Entries in each group are by release date.