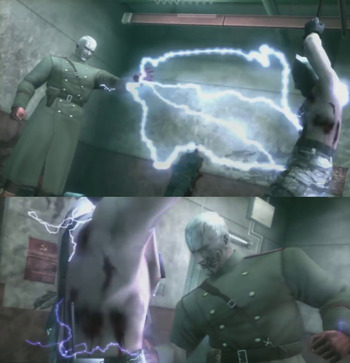 Volgin doing what he does best.
"Colonel Vermon CaTaffy! The single most feared terrorist on the planet, a psychopath bent on dominating the world, his nature so cruel as to verge on insanity. He was a total paranoid, his deeds those of a madman.
Colonel CaTaffy was dictator for life of his small but incredibly wealthy and savage desert country, Nouria. CaTaffy's sole purpose in life was to bring the democratic nations to their knees. His terrorist actions were hideous, violent, always unexpected.
And always effective, because they struck fear into the hearts of world leaders. CaTaffy bombed civilian aircraft, killed innocent people, took non-combatants hostage, and tortured them without mercy."
—Metal Gear (Worlds of Power)
Advertisement:

In a franchise where many antagonists have loved ones, standards, or well-intentioned goals, these select few stand out as utterly reprehensible figures.