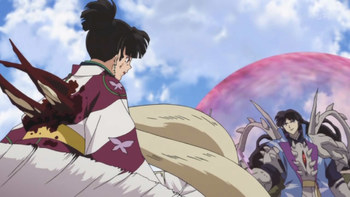 "Not to worry...I was careful to avoid hitting your precious heart[...] Enjoy what little time you have left to live...of course, it will only be filled with pain and despair."
Inuyasha: Do you know how many villages were destroyed just so you could lure Kikyō out?!
Hakudōshi: Oh, please. Is that what you're so upset about?
— "Kohaku's Decision and Sango's Heart"
Advertisement:

Across the brutal world of the Sengoku Period, the heroes have faced many vicious adversaries, the worst of whom standing out above the others for sheer depravity.