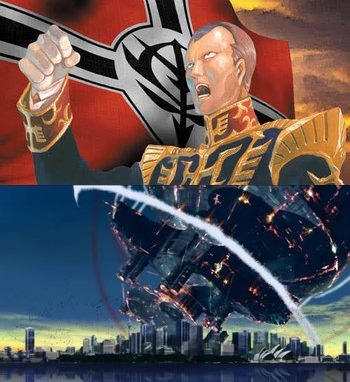 "Gihren is a despot trying to exterminate the very source of life that has supported and nurtured him. We, of the Federation, shall never comprehend the monstrosity of his actions."
"Wherever there is a ZAFT presence, we'll torch everything in sight. Anyone suspect of being intimate with them needs to be taught the lesson again. They need to remember that Naturals and Coordinators are different. And anyone who betrays that fact will find they've bought a one-way ticket to Hell."
—Lord Djibril, SEED Destiny, "Stella" (Episode/Phase 32)
Advertisement:

The various Gundam series, and related works, have a habit of trying to show war in various shades of gray, and as a result, most villains—if they can even be called that—are tempered with sympathetic human qualities. However, there are still exceptions to the rule.