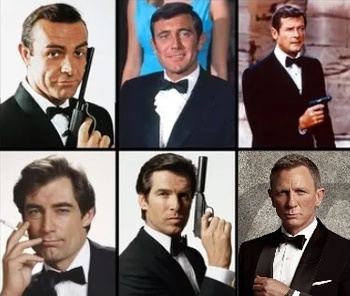 The son of Scotsman Andrew Bond and Swisswoman Monique Delacroix Bond, James Bond is, to put it simply, the best agent in the British Secret Intelligence Service, commonly known as MI-6, and a Royal Naval Reserve Commander. The "double-O" prefix indicates his discretionary licence to kill in the performance of his duties. He's also an incurable womanizer.

Each actor played his own distinctive version of the character, often differing from the book character as written by Ian Fleming, but still coming back to him at times. An overall discussion of the whole character of James Bond is a subject that has entire books dedicated to it.

open/close all folders
Advertisement:
The Character in General
Literary 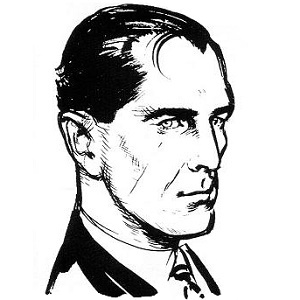 "Goldfinger's dead. If anyone makes a move or disobeys an order I shall kill him."

First appearing in Casino Royale, Fleming's Bond is very different to what modern readers who have seen the movies would expect. Compared to the suave superspy of the films, he is a ruthless, cold Professional Killer first and foremost, more willing to be violent and does not always have the best attitudes to race or women. Yet, he eventually grows more and more heroic as the books go on, especially with the later writers.

Fleming's Bond is notable for his distinct physical appearance, with black hair, blue eyes, a three-inch scar on his right cheek and a comma of hair that is always present. 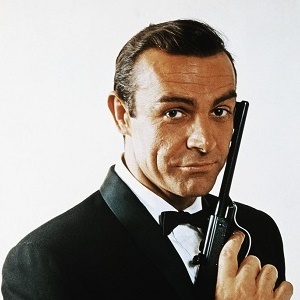 Dubbed in Czech by: Pavel Šrom

Appearances: Dr. No | From Russia with Love | Goldfinger | Thunderball | You Only Live Twice | Diamonds Are Forever

As the first cinematic Bondnote but not the first person to play him — that title goes to Barry Nelson in the 1954 Climax! series TV movie Casino Royale (1954) while the first person to play a British Bond was Bob Holness in a 1956 South African radio version of Moonraker, Sean Connery is very much considered the character's iconic codifier. Particularly notable for his distinctive accent and suave sophistication — in fact, it was due to Connery's portrayal that Bond was canonically established in the novels as half-Scottish. First to employ the Bond One-Liner, naturally.

Tropes specific to his interpretation of Bond in the non-Eon Productions film Never Say Never Again can be found here. 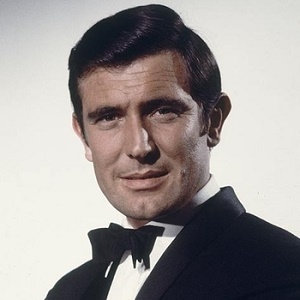 "There's no hurry you see — we have all the time in the world."

Appearances: On Her Majesty's Secret Service

"This never happened to the other fella."
— On Her Majesty's Secret Service

Lazenby was an obscure actor and an obscure Bond. He only appeared in one movie, On Her Majesty's Secret Service. However, it is well liked among hardcore Bond fans and casual viewers alike. The film is widely assumed to be bad, since if it had been good, Lazenby would have made more, right? Well, not really. Lazenby's problems were primarily behind the scenes, and the fact that he was replacing Connery made it a no-win situation with some critics, but most of that criticism has faded with time. The film is well regarded these days among those who have seen it, and even back in 1969 there was every expectation of him continuing in the role. Lazenby says that he didn't return because he was given advice not to. Apparently his agent told him that the Bond franchise was on its way out and hippie movies were the next big thing. Boy, was that wrong. Lazenby fired his agent soon afterwards. 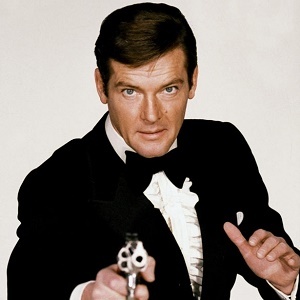 "Keeping the British end up, Sir!"

Dubbed in Czech by: Vladimír Brabec

Appearances: Live and Let Die | The Man with the Golden Gun | The Spy Who Loved Me | Moonraker | For Your Eyes Only | Octopussy | A View to a Kill

Log Cabin Girl: But James, I need you!
Bond: So does England!
— The Spy Who Loved Me

Moore tended to play his Bond more for comedy, but he did do it pretty serious at times, as in For Your Eyes Only. He hung around for a record tenure of seven moviesnote Daniel Craig has surpassed his tenure in years, but not in number of movies, as Craig's films took longer to produce on average, was fifteen years older than Connery was for his first time in the role. He was perhaps the most polarizing Bond actor, since two of his movies — The Spy Who Loved Me and For Your Eyes Only — are among the most well-received films in the series, while Moonraker and A View to a Kill are considered among the worst. 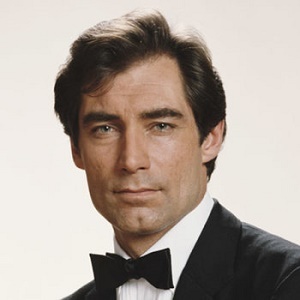 Dubbed in Czech by: Ladislav Beneš

M: This private vendetta of yours could easily compromise Her Majesty's government. You have an assignment, and I expect you to carry it out objectively and professionally!
Bond: Then you have my resignation, sir!
— Licence to Kill

Dalton began the trend of portraying Bond with a darker tone, and is still considered the darkest of all of them (rivaled only by Daniel Craig), which some felt was needed after the sometimes overly comedic Moore films. He was also a fan of the books and tried to create Ian Fleming's Bond on-screen twenty years before Craig and the Bond producers ever thought of doing so. At the same time, he has also been praised for having the most realistic love scenes. The producers actually considered him for On Her Majesty's Secret Service, but he felt he was too young (only 23) at the time. 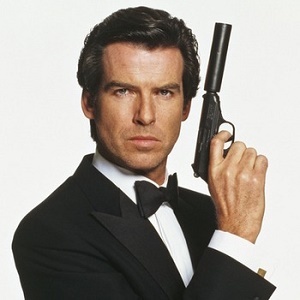 "What, no small talk? No chit-chat? That's the trouble with the world today, no one takes the time to do a really sinister interrogation anymore. It's a lost art."

Dubbed in European Spanish by: Abel Folknote Eduardo Jover, who voiced Brosnan in Remington Steele, voiced him in a GoldenEye trailer but Folk was opted to be the most suitable voice actor

M: You don't like me, Bond. You don't like my methods. You think I'm an accountant; a bean counter more interested in my numbers than your "instincts."
Bond: The thought had occurred to me.
M: Good, because I think you're a sexist, misogynist dinosaur. A relic of the Cold War, whose boyish charms, though wasted on me, obviously appealed to that young woman I sent out to evaluate you.
Bond: Point taken.
— GoldenEye

Brosnan is the person whom people tend to think of when they imagine Bond in the post-Cold War era, especially among viewers who came of age in The '90s and GoldenEye was the first Bond flick they saw. He was supposed to appear in The Living Daylights, but the production staff of Remington Steele decided to pull a fast one on EON Productions. Brosnan was just what the franchise needed after the six-year hiatus due to legal issues, and he was the first actor since Connery whose casting was widely embraced by the general public even before GoldenEye came out. He also scores points for looking the most like Bond as Ian Fleming described him (black hair that falls into a comma over the right eye, cold blue eyes). Brosnan was a self-admitted Ascended Fanboy: the very first movie he ever saw was Goldfinger; also, his late wife, Cassandra Harris, appeared in For Your Eyes Only. 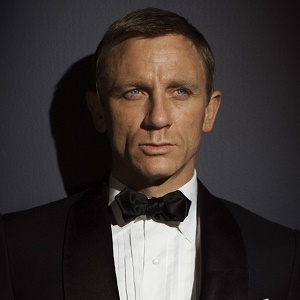 "I understand Double 0s have a very short life expectancy... so your mistake will be short-lived."

Dubbed in Czech by: Jiří Dvořák

Vesper Lynd: It doesn't bother you? Killing all those people?
Bond: Well, I wouldn't be very good at my job if it did.
— Casino Royale

Daniel Craig's interpretation of 007 is often regarded as a successor to Dalton's for his serious and gritty take on the role, which is closer to the character as originally written by Ian Fleming. His casting was initially met with skepticism, but it eventually paid off with the very positive reception of Casino Royale, with special praise to his performance. He is the shortest Bondnote he's 5'10", the other Bonds were all over 6 feet. and the first to be blond. His tenure was the longest in the series in terms of years (fifteen years, from 2006 to 2021)note Although not in number of films; that record still belongs to Roger Moore.