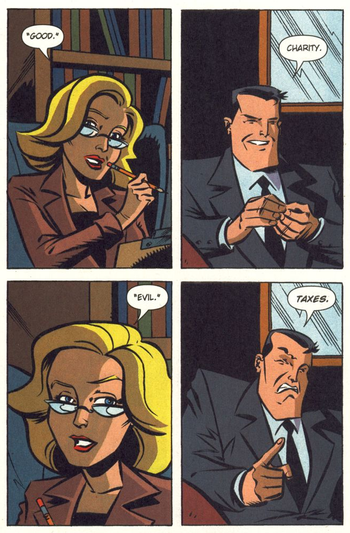 Another element of Hollywood Psych (along with the Inkblot Test and the "What was your mother like?" question) regarding comedic possibilities for a psychiatrist setting. Typically the scenario is that the psychiatrist will ask the patient a series of words and tell the patient to say the first word that comes to mind. In Real Life therapy, the therapist doesn't really care about what a person responds, they are interested in seeing how long it takes to respond. The reasoning is that if a person takes a longer-than-average time to formulate a response to a particular prompt, they have a mental block (formally, a "complex") on that topic and it deserves to be probed deeper.

A common gag is for the person to say the same word every time no matter what word the psychiatrist says.

Between Bond and a psychologist after 007's return to duty.

Between Bond and a psychologist after 007's return to duty.