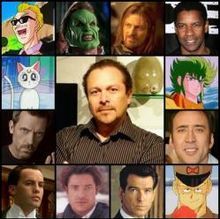 Salvador Delgado and some of his roles
Advertisement:

Originally a stage actor, Salvador Delgado Solórzano (born July 24, 1961) started his voice acting carrer in 1985, after the company he worked in lost its theater in the infamous Mexico City earthquake. From then on he began voicing deadpan snarkers of different kinds, which he has done in live-action, animation of different kinds, etc.

Younger people will mostly know him as the voice for Dr. Gregory House from House, M.D., but others will recall him as the unofficial VA for charas played by Pierce Brosnan, Denzel Washington or Nicolas Cage.

His relative, Humberto Solórzano, is a voice actor in his own right.

As the VA for Denzel Washington:

As the VA for Jamie Foxx:

As the VA for Nicolas Cage:

As the VA for Pierce Brosnan:

As the VA for Sean Bean: