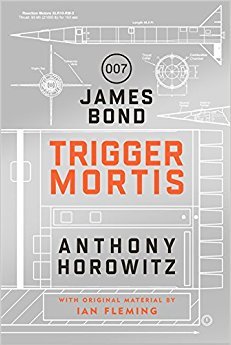 A James Bond novel published in 2015, and written by Anthony Horowitz. It contains small amounts of material originally written by Fleming, from a series of short pitches he did for a potential TV series that never was. The original pitch was titled "Murder On Wheels", which becomes a chapter title in the novel.

It's 1957, and James Bond and Pussy Galore are living together in Bond's flat... and it's starting to grate. So Bond jumps at the chance to take a mission involving one of his favourite pastimes - motor-racing. But a Soviet plot to kill a racing driver leads Bond to discover something far bigger, and the future of the Space Race at risk.