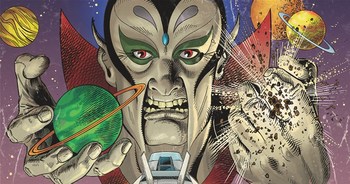 "The descendants of those who imprisoned me here shall die — quickly, if they grovel for mercy. All will make a useful contribution, however. They are the raw materials for my army of conquest!"
— Xakhaz, Beneath Nightmare Castle (Fighting Fantasy)
Advertisement:

Gamebooks can have vile villains.

Entries within each group are by publication date.