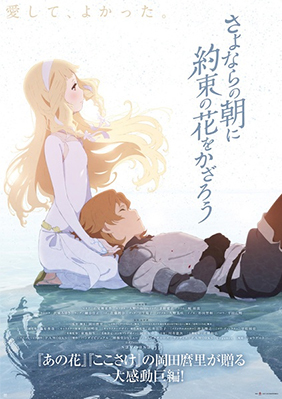 "
"You cannot fall in love with someone from the outside.
If you fall in love, you will become truly alone."
Advertisement:

The above was told by clan elder Rachine to the lonely Maquia, a 15-year-old girl born to the Iorph tribe, those who while away their days weaving their reclusive near-eternal life into Hibiol fabric. But that very night, troopers from Mezarte Empire attack the village with their legendary Renato dragons, seeking the way to attain immortality. Maquia is separated from her home, her one-sided love Krim and her friend Leillia among many others, before finding an infant boy who lost his parents in a nearby forest. Overcome by her loneliness, she chooses to adopt Ariel as her son, setting off a generation-spanning saga between a girl who never ages and a boy who will continually grow up; a story that teaches what relationship means in a world where nothing lasts forever.

With that kind of story and production staff, expect waterworks.

One of the biggest surprises of 2018, the film is distributed by Showgate and first premiered in Japan on February 24, 2018 as a general release and outside Japan on March 4, 2018 at the Glasgow Film Festival.