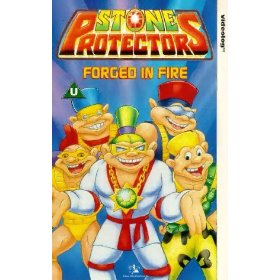 Stone Protectors was a toy line and 1993 animated series. The whole thing was made in an attempt to market troll dolls to young boys. It was fairly unsuccessful.

The premise was that five members of a terrible band called the "Rock Detectors" stumbled across some strange magical stones, which are sought by Zok, an evil music-hating reptile-like creature. Princess Opal of Mythrandir split a powerful magic stone into six pieces, and Zok only has one. He wants to gather them all and reforge the original magic stone in order to become all powerful. The crystals make each band member gain awesome powers (none of those powers being playing well), and they are whisked away to Mythrandir to help save Princess Opal's land form Zok.

This rather obscure show only lasted 13 episodes. It was released onto some VHS tapes in 1994. A video game was also produced, which got better reviews than the show did.