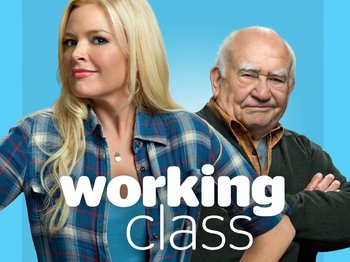 Working Class is a 2011 CMT sitcom, the first scripted program for the network.
Advertisement:

Melissa Peterman (host of The Singing Bee on the same network; best known as Barbara Jean on Reba) stars as Carli Mitchell, a twice-divorced mother of three trying to make ends meet between her kids and her idiot leech of a brother. She works at Whole Parker Foods with her neighbor, Hank (Ed Asner), and her boss, Rob (Patrick Fabian), whom she has a crush on.