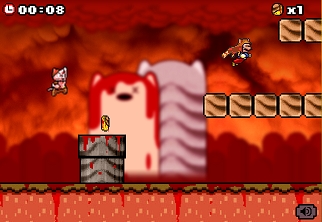 "SAVE YOUR SKIN!"
When on a mission to rescue the princess, Mario has been known to use any means necessary to defeat his enemy—even wearing the skin of a raccoon dog to give him special powers.
Tanooki may be just a "suit" in Mario games, but in real life, tanuki are raccoon dogs who are skinned alive for their fur. By wearing Tanooki, Mario is sending the message that it's OK to wear fur. Play Super Tanooki Skin 2D and help Tanooki reclaim his fur!
— Official description
Advertisement:

The premise, such as it is, is that Mario is evil because he uses Tanooki Suitsnote (even though they're not from tanukis and come from question blocks), and a tanooki has gotten fed up with this and has set out to catch Mario and save his skin. Thus, through a fairly short Auto-Scrolling Level, you must jump over obstacles and take your skin back from Mario.

Upon release, the game was heavily criticized by gamers for missing the point of the Tanooki Suits, something the company's games tend to suffer from as a whole. As such, Retsupurae has taken on the game (or rather, its message) in this video

See also Super Chick Sisters, another Mario spoof made by PETA, and Pokémon Black and Blue, a Pokémon spoof by PETA.