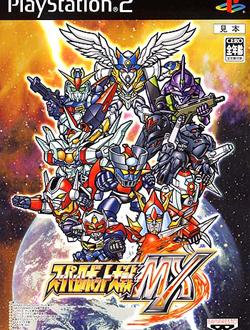 MX is one of the few games in the franchise where the player doesn't have a choice of which "Banpresto Original" protagonist they can play. Both originals Hugo Medio and Aqua Centolm share the same machine, though there's still a choice of which two mecha to use: the Super Robot Garmraid or the Real Robot Cerberus.

MX is the first SRW to have the Mobile Suit Gundam series not partake in any of the major events of the game. Other than Mobile Fighter G Gundam, which loosely links their endings (from which the MX storyline is set after the endings, according to the events of Impact) and plots to the original storyline, the other Gundam productions almost solely exist in purpose to support other non-Gundam titles of MX. It departs from other SRW productions where conflicts between various Gundam factions must be taken as part of the overarching storyline. The only other game to do this is Super Robot Wars NEO.

As suggested by many of the series included, MX was originally intended to be a direct sequel to Impact, including several same series from that game, most notably Machine Robo. At the same time, both games feature the "Free Route" system, use the same in-game font, and much of MX's soundtrack is remixed or rearranged from Impact's (a remixed version of the Impact theme's played in the final stages of the game). Some sprites and cut-ins from Impact are reused in MX; the most noticeable is arguably the God Gundam's sprite and the "God Finger" Super Move Portrait Attack.