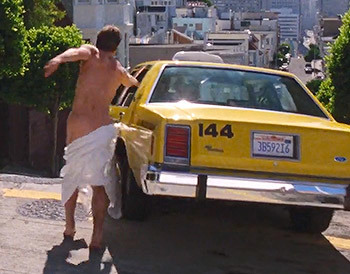 In accordance with the Rule of Funny and/or sometimes the Rule of Sexy, fictional characters suffer from a disproportionately high chance of ending up naked, or at least mostly naked, as a result of a piece of clothing getting stuck in a car or elevator door, snagged by a nail, or perhaps simply stepped on and subsequently ripped off.

Often leads to a Comedic Underwear Exposure, Hand-or-Object Underwear or a Naked Freak-Out.

Subtrope of Wardrobe Malfunction and Clothing Damage. As it's often played for laughs it also has a lot of overlap with Naked People Are Funny. Compare Giving Them the Strip, wherein a character intentionally removes a piece of their clothing to escape from someone or something holding them back by it. Sometimes this is caused by a Rod-and-Reel Repurposed. Also compare All Cloth Unravels and Theiss Titillation Theory.