Webcomic / Sandra on the Rocks 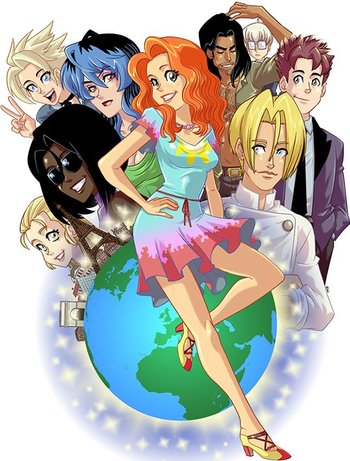 "When Sandra's around, everything is wild...and glamorous!"
— Marie (frothing Sandra fangirl)
Advertisement:

Sandra on the Rocks

is a webcomic written by Dave Lumsdon (aka Dave Zero1) and drawn by Remy "Eisu" Mokhtar. It originally started as filler strips in its parent comic, Ménage à 3 in December 2011, became a separate production on April 2, 2013, and ended on July 1, 2019. The lead character comes from Ménage à 3, but Sandra has a different artist and a somewhat different atmosphere; it's less a Slice of Life and more of a satire of the clichés of the modelling and computer games businesses. Also, while Ménage à 3 and its earlier Spin-Off Sticky Dilly Buns are set in Montreal, Canada, this comic is set in Paris, France, at least to begin with.

The title character, Sandra Arden, was originally a member of Ménage à 3's second-line cast, a booze-loving waitress and workmate of first-line character DiDi. In that comic, through a drunken accident, she found herself transported from Montreal to Brazil in the company of transgender model Senna — which is where this one starts. Unable to get home, Sandra becomes Senna's personal assistant, soon discovering that Senna is a boss from hell. Her salvation comes in the form of international fashion photographer Domenico Pedrazzini, who whimsically decides that her freckles make her interesting, declares that she will be his next great discovery, and ships her off to Paris to learn from his team of assistants.

Unfortunately, once there, Sandra not only discovers that Domenico is an unpredictable flake, but runs into further problems such as his PA, Tatiana Likhachyova, who quickly becomes insanely jealous of Domenico's interest in Sandra and determined to drive her off or destroy her. However, Sandra wants to stay, if only because she soon finds romance in Paris. Aside from the contest between Sandra's innocent luck, resilience, and unreliable gumption, and Tatiana's erratic attempts at evil, some of Sandra's modelling gigs get complicated, she finds specialised fame as a video games model, and a number of other characters enter the cast, many with their own Plot Threads.

Like the parent comic, this is constructed as a very traditional four-panel strip (the western equivalent of a Yonkoma); there are always four panels, or occasionally some double panels. Originally, they appeared online as a single row of four, but since a major Website redesign in early 2020, they have been posted in a 2x2 layout. (As the print collections have always been printed with this 2x2 format, any double panels are always located in positions 1 and 2 or 3 and 4.) Also, the great majority of strips end with some kind of comedy punchline, despite the fact that there is a continuing story.

The first page is here

The comic is now concluded. A backup can be found here

Sandra on the Rocks contains examples of: