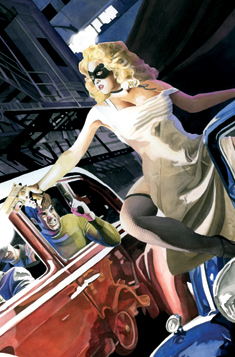 The Domino Lady was a masked pulp heroine who first appeared in the May 1936 issue of Saucy Romantic Adventures. All of her stories were published under the house name "Lars Anderson" owned by the publisher, Fiction Magazines. The author's real identity is unknown, although it has been suggested it was a well-known writer. New short stories and a comic book featuring The Domino Lady are currently being published by Moonstone Books.

The Domino Lady is really University of California, Berkeley-educated socialite Ellen Patrick. When her father, District Attorney Owen Patrick, is murdered she puts on a domino mask and a backless white dress to avenge him. She would arm herself with a .45 pistol and a syringe full of knockout serum, but often her best weapon was her beauty, which often distracted and entranced opponents, or at the very least led them to underestimate her, allowing her to outwit them. Such wiles rarely worked upon her female adversaries, however.

She steals from her targets, donating most of the profits to charity after deducting her cut, and leaves a calling card with the words "Compliments of the Domino Lady".

The Domino Lady stories and comics contain examples of: