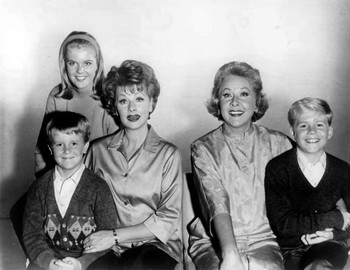 The follow-up to the highly successful I Love Lucy, which aired for six seasons (1962–68) on the same network (CBS) as its predecessor. The series was loosely adapted from the book Life Without George by Irene Kampen.

Lucille Ball stars as Lucy Carmichael, a widow with two children, Chris (Candy Moore) and Jerry (Jimmy Garrett), who shares her house in suburban Danfield, New York with her divorced friend Vivian Bagley (Vivian Vance) and Vivian's son Sherman (Ralph Hart). Lucy had been left a substantial trust fund by her late husband, which was managed during the first season by Mr. Barnsdahl (Charles Lane), then by Theodore J. Mooney (Gale Gordon) during the next two seasons. Personality-wise, Ball and Vance's characters were effectively the same ones they played on I Love Lucy.

Recurring characters during the first season included next-door neighbor Harry Connors (Dick Martin), Vivian's beau Eddie Collins (Don Briggs) and Chris' boyfriend Alan Harper (Tom Lowell); all three were retired without mention by the second season due to the departure of their actors.

During the third season, as Vivian Vance cut back on her appearances, Ann Sothern made a few appearances as "Countess Framboise", the widow of a count who left her "his noble title and all of his noble debts" and who sparred with "Mr. Money" (as she called him) in her attempts to get money to cover said debts. This attempt at having Sothern replace Vance as co-star fizzled out when the former insisted on getting top billing alongside with Lucille Ball, who was against it. Chris, Jerry and Sherman, meanwhile, appeared much less frequently during that season.

At the start of the fourth season, with Vance gone for good as a regular, Lucy and Mr. Mooney moved to Los Angeles and Lucy began working for Mr. Mooney. The other characters were written out: Vivian remarried and stayed in Danfield with Sherman, Chris went to college and Jerry, while he made it to Los Angeles at first, was shipped off to a military academy after two episodes. A new character, Mary Jane Lewis (Mary Jane Croft), filled the "best friend" role previously assumed by Vance. During the fifth and sixth seasons, various guests stars appeared as themselves conducting business at the bank Lucy worked at, including a few appearances by Vance as her old character (now known as Vivian Bunson).

Ball ended the series after the sixth season in 1968; a new series, Here's Lucy, debuted in its place. This change was done for two reasons: one, to allow Ball's children, Lucie Arnaz and Desi Arnaz, Jr., to appear alongside their mother and two, because Ball felt enough episodes were produced for syndication. The fact that she sold Desilu Studios (the company that produced The Lucy Show) to Paramount also reportedly influenced the decision, as Ball didn’t want to continue a series she no longer owned; Here's Lucy was produced by her new company, Lucille Ball Productions.

For unknown reasons, 30 episodes of the series have lapsed into the public domain. These episodes were issued on home video by numerous public domain content distributors. Paramount themselves never issued any official releases of the show on VHS, it was only after Paramount's TV library was acquired by CBS that the show got official home video releases in the form of season sets, and later a complete series set, on DVD.

Lucy's dress gets caught in an elevator and unravels.

Example of:
All Cloth Unravels

Lucy's dress gets caught in an elevator and unravels.